Not everyone walks straight from school or university into their dream job, but for Mimma Kazis, Eleni Meggetto, and Jennifer Pacifico, it took having a baby to realise exactly what they wanted to do with their lives.

All three women had their babies at North Eastern Community Hospital and, as a result of the experience, were inspired to enrol in midwifery studies. After graduating, they each secured a position at North Eastern, and now work together as midwives in the hospital’s maternity ward.

Mimma Kazis had all four of her girls (24, 12, 11 and 9) at North Eastern, commencing midwifery studies when her youngest child was 12 months old, after an 18 year career in pharmacy. Mimma says that after working at North Eastern for nearly four years she couldn’t be happier with her decision to switch careers.

“After having my second child (Olivia) I said ‘one day I will work at North Eastern’, and low and behold, that’s what happened,” says Mimma.

“We wanted a fourth child, and as soon as Isabella was born I decided to follow my passion.

“North Eastern has a community feel… and that was something I wanted to be a part of. As a patient I experienced it, and now as a midwife it’s still true – the patients become part of your life. If you finish your shift and a patient hasn’t had their baby, you call back later to see how it went.” 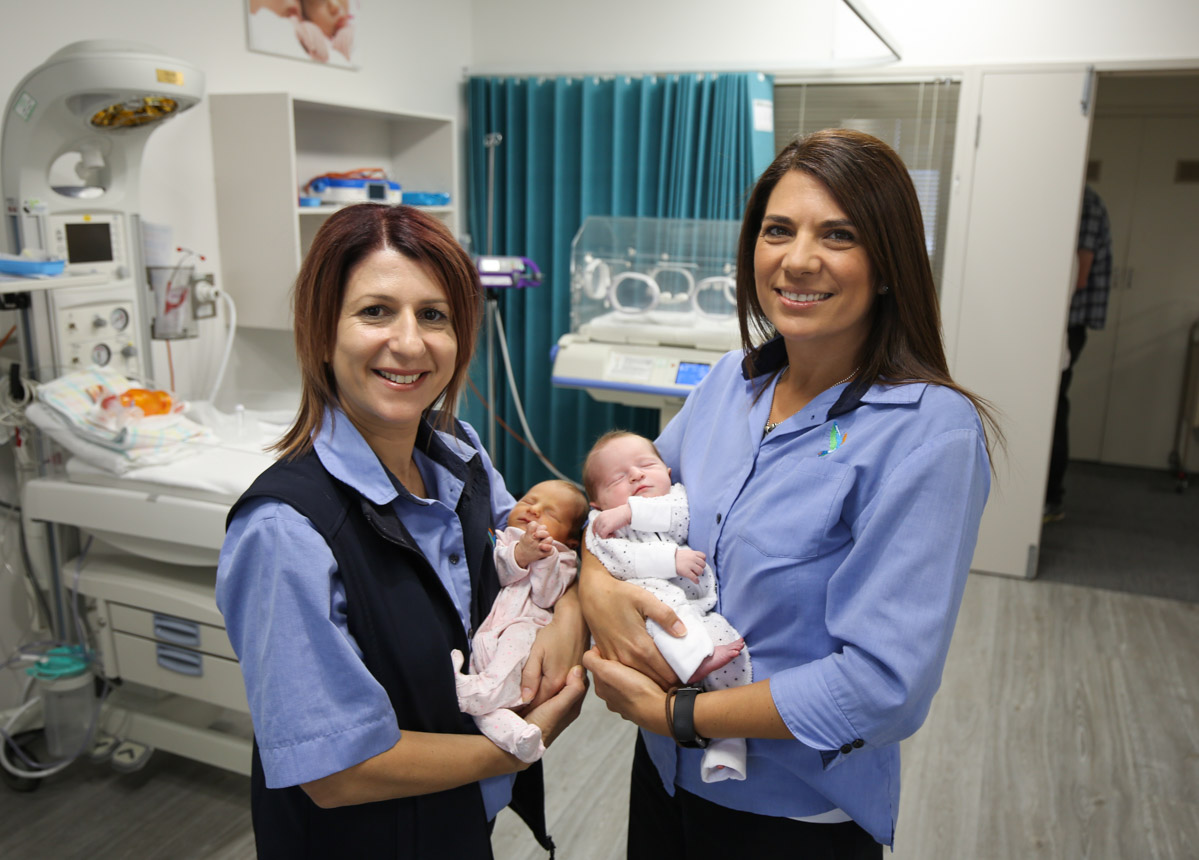 Eleni Meggetto has worked at North Eastern for almost six years, having previously worked as a receptionist for a finance company. She had her three children (17, 15 and 12) at North Eastern, and while she started midwifery studies when her youngest child was 4, she knew she wanted to be a midwife after the experience she had giving birth to her first child.

“I had no idea what to expect and the way the midwives helped me, looked after my baby, and generally made my whole experience a life changing one, I knew I wanted to be able to have the same impact on others,” says Eleni.

“I love the community feel of the hospital and the people I work with are amazing. I love the environment and the way we can help people and make a difference.

“Sometimes you see people a few years later either in the community or returning to have another child and they remember you as their midwife and that’s pretty incredible.”

Having worked in the banking and insurance sector, Jennifer Pacifico began giving serious thought to studying midwifery as a mature age student after having her youngest child at North Eastern in 1999.

“I felt safe and trusted her (the midwife) with my care and the care of my unborn child,” says Jennifer.

“Being a midwife seemed like such a privilege. To be a part of one of the most memorable moments in life was something that felt so honourable to me. To work in a profession that you love is only gifted to a very few – I wanted to be that person.”

After finishing her studies, Jennifer secured an undergraduate midwife position at North Eastern in 2006, and felt like she was “home”.

“I love working in Labour Ward especially, and I still get teary at every birth I’m a part of. I have had the privilege of meeting some wonderful people along the way, some of whom have returned to NECH for all of their children, and I have had the honour of being a part of that.”

Mimma Kazis and Eleni Meggetto started working at North Eastern through the hospital’s Midwifery Nurse Graduate Program, which employs one new Registered Midwife each year. The Registered Midwife is given the opportunity to practice in a supportive environment with the assistance of a mentor and the clinical manager. The next graduate program starts in March 2019.